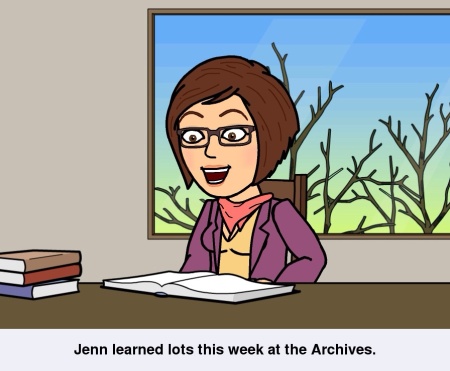 It’s been a great week. Five full days spent digging through the collections at the Rockefeller Archive Center in search of the short-lived New York Police Department Psychopathic Laboratory. It had its ups and downs, but then again, I suppose all archive trips have a few of those. And it was both exhausting and energizing.

For the non-initiated: archiving is hard work. I realize it doesn’t look like much, but I promise you’ll change your mind after a week spent in the reading room. Sifting through page after page of documents and diligently taking notes for eight or so hours is not as easy as it seems. It’s draining both physically and mentally. Moreover, the day does not merely run from opening to closing. The week also consists of late nights spent checking notes, re-reading sources, and trying to follow up with leads, questions, and general breadcrumbs. Dinner conversation inevitably turns to a focus on the day’s discoveries (or frustrations). The brain is constantly turned “on” – so the week is a long one.

Despite the work that goes into it, I find archiving ridiculously energizing for my “historian spirit.” The detective-like process of seeking out the little clues and slowly figuring out how the puzzle fits together is amazingly fun. I may feel like I’m in desperate need of a nap, but I’ve also already written most of a paper in my head (and parts on paper). Now to just keep that motor running…

Archival Frustration: How could there be no mention? (and who is Eleanor I. Keller?)

Day 4: at the Rockefeller Center Archives

I should have known that yesterday‘s excitement was too good to be true. Today I felt like all I did was face one question after another. The New York Psychopathic Laboratory was only open from 1916-1917 (with a trial run in 1915 and a “revival” of sorts in 1926-1927) so, in theory, it should be easy to locate within the Minutes and financial records of the Bureau of Social Hygiene. Right? Wrong. I flipped through page after page, folder after folder, madly clicking away with my camera in the hopes that maybe I was just missing something that should be staring me in the face. There was nothing (except a bunch of information about a project I’d like to pursue in the future about the Bedford Reformatory). I’m in a state of disbelief.

The work has also raised some other interesting questions such as: who is Eleanor I. Keller? She’s listed as the psychologist who worked at the Laboratory, but she exists as nothing more than a cursory mention on the staff list in the archival record. Given that the purpose of the Laboratory was to perform both psychiatric and psychological testing on those arrested at New York’s Police Headquarters, I would say she must have played a fairly critical role. And yet my cursory searches for her have yet to provide much detail. One of the issues is that when you Google “Eleanor I. Keller” you get a lot of hits about the meetings/correspondence between Eleanor Roosevelt and Helen Keller. And after a day of archiving, my energy levels permit little more than a quick Google search. I know she wrote about her work at the Laboratory – and I know her start and end dates for this work. But I don’t know much else yet – where did she get her PhD? Who did she work with? Typically I would approach the challenge as an exciting bit of detective work but after today’s frustrations in the archival records I’m feeling somewhat more negative about the venture.

Seek and Ye Shall Find: A Great Day in the Archives

Day 3: at the Rockefeller Archive Center

Last night over dinner with Jeremy Burman, I was complaining about a number of questions that my work this week in the Bureau of Social Hygiene collection at the Rockefeller Archive Center was raising. I explained that I felt like I was on the edge of understanding several elements connected to the Psychopathic Laboratory but when I held them up to the light, could see nothing but holes. I think “the archives” may have been listening in on my conversation: Folder after folder today answered each of my questions in turn (and even confirmed two “gut” hunches). The answers were so direct to my questions that I actually felt a momentary chill on my spine.

Silliness aside, it was a wonderful day.

The day also made it clear how nice it is to travel with someone. On the one hand it has been helpful to discuss with a colleague what I’ve been reading and how the pieces of the puzzle are slowly starting to fit together. But on the other hand, it’s really refreshing to have someone to share the joys of discovery as they arise during the day. It can be a bit deflating to come across a particularly juicy detail or exciting clue only to look around the room and realize that everyone else is busy with their own projects and not interested in your news. Having a colleague the next desk over (who is also patient and willing to come see what you’re madly gesturing at) has been a real treat this week.

How to make your researchers feel spoiled 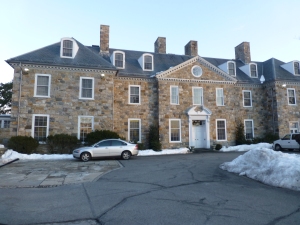 Day 2: at the Rockefeller Archive Center

I have the distinct feeling of being spoiled this week. First it was the cookies in the researcher lounge, now it’s a lunch hosted by the staff of the Rockefeller Archive Center. At 12:30 an invitation was put out in the reading room, calling researchers to join the RAC staff for a meal and introductions. What impressed me even more was not the interested conversation around the table but the efforts undertaken by the individual staff members to make suggestions relevant to each of our widely varying research projects. At this rate I’m going to be hard pressed to leave when the week is over.

But Day 2 was not all food and conversation – in the morning I read through some of the annual reports of the Bureau of Social Hygiene to get a sense of the various projects it was funding in the early decades of the twentieth century. Post-lunch it was back to the New York Police Psychopathic Laboratory records. In addition to the stacks of case histories detailing the personal histories of those who were  tested by the laboratory, I came across a number of interesting newspaper and magazine articles that seem to capture the aim of the laboratory as not simply to identify individuals among those being arrested who were to be labelled “mentally defective” (to use the terminology of the period) but also to prevent future crimes (see online samples here and here). I became so lost in my reading that I lost all track of time and had to be told that the reading room was closing for the day. Back to it tomorrow!

Day 1: at the Rockefeller Archive Center

I’ve rang bells and buzzers, talked into intercoms, and even called down a private elevator via an old red phone that gave me the feeling of being on a secret mission – but today was the first time I’ve entered through the gates of what seemed otherwise to be the private entrance to a grand home in order to conduct archival research.

In actuality, the Rockefeller Archive Center in Sleepy Hollow, NY is a grand home entered via a private gate — the archives operates within Hillcrest, the home built for Martha Baird Rockefeller, second wife of John D. Rockefeller, Jr. Completed in 1963 the house has the feel of a much older era with nineteenth century portraits on the walls and Victorian furnishings. The lockers for researchers are neatly hidden inside M.B.R.’s closet and the reading room on the second floor was originally designed to be a sitting room. The dining room has even been converted for use by researchers in need of a break, complete with a coffee machine and a tin of cookies (!!) on the table. Hardly a shabby environment in which to spend some time searching through boxes of archival documents.

Cookie and décor distractions aside: I’m on the trail of a new(ish) project. I’ve recently begun focusing my attention on the history of “criminal insanity” – how it was defined and the institutions that were specially designated for those assigned with the title. As part of this larger project, I jumped when an opportunity presented itself to spend the week at the Rockfeller Archive Center and consult the papers related to the New York Police Psychopathic Laboratory (H/T to Jeremy Burman for the invitation to tag along on his dissertation research trip). END_OF_DOCUMENT_TOKEN_TO_BE_REPLACED

An extra stop on my way home

Megabus made it up to me today for all the delays I’ve experienced over the past few weeks: we not only made it to NYC on schedule but also made it in time for me to catch the last tour offered at the NY Public Library!

This was my first time getting to go INSIDE the Library – it was absolutely incredible! Gorgeous architecture, incredible history, and a mandate of free and public access to everyone.

END_OF_DOCUMENT_TOKEN_TO_BE_REPLACED 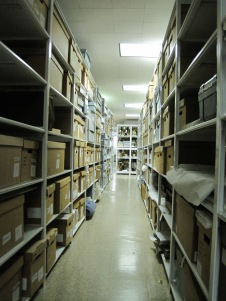 It was a great Friday: spent the entire morning digging through boxes in the NY State Museum‘s storage room for artifacts from the Utica and Willard State Hospitals. Got to see some really interesting material! Among the coolest was Amariah Brigham‘s phrenological hat (for a film about how it works see this link – watch from 43 seconds in).

Finished off with the Utica annual reports in the afternoon + made it part way through the volumes of The Opal. Definitely am going to need to come back – I barely dented the materials held by both the Archives and the Museum!!

Heading back to NYC tomorrow AM and then it’s back on the overnight bus to Toronto. Next trip: Tim and I are driving across Canada to check out asylum and mental hospital museum collections! We leave next weekend.

Day 4: I think I know the location of ark of the covenant

Today I got to go on a field trip to the NY State Museum‘s off-site storage facility!! I got driven out with some of the Museum’s employees in a passenger van to Rotterdam, about 30 minutes away, where the Museum stores the majority of its artifacts in this old ammunitions bunker. It was quite cool: a giant warehouse filled with items as far as the eye could see. Anything you could think of was in this place: furniture, cars from every era, boats, circus gear, clothing – and the Willard suitcase collection of course (pictured)!

END_OF_DOCUMENT_TOKEN_TO_BE_REPLACED

Day 3: Films, reports, and The Opal

I was worried about today after yesterday’s discouragements and was really in poor spirits when I woke up feeling horrible after eating some questionable pizza delivery last night….But I arrived to sign in at the Archives this morning only to find that my new favourite Curator, Craig Williams, had left me a gift! He gave me a copy of two films: one was made at Hudson River (circa 1960s) and the other at Utica (circa 1920s) – and they are so freakin’ cool! Both run along the same premise of tracing the path from admittance to discharge but in slightly different ways. I smell a film night when I get back to T.O.! (No, the links are not to the actual videos I got)

END_OF_DOCUMENT_TOKEN_TO_BE_REPLACED

Some days are just the wrong century

Dug through a cart’s worth of boxes today. Found a few cool items but the 20th century predominated – looks like there’s a great history-of-occupational-therapy-in-institutions project waiting for someone. There are some great photographs from the 1930s right up into the 1970s – unfortunately there were far fewer items from my selected century 😦